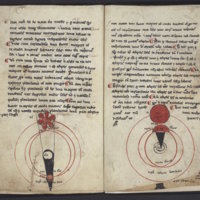 The Tractatus de sphaera (or De sphaera mundi) was the most important Latin medieval text on Ptolemaic astronomy, and the Kislak Center is fortunate to have four copies, two of which (LJS 26 and LJS 216) were produced during or soon after Sacrobosco’s lifetime.Likely a composite of information from the Almagest, Arabic commentaries by al-Battānī and al-Farghānī, and earlier Latin sources such as Macrobius, this widely disseminated university text described the division of the “sphere of the world” above the Earth into nine parts: the primum mobile (“first moved”), fixed stars, planets, sun, and moon.

Like LJS 216, this manuscript also contains Sacrobosco’s Algorismus, a practical arithmetic manual that was the first text to use Hindu-Arabic numerals in a European scholastic context. The Tractatus contains eleven diagrams and illustrations, which include the celestial spheres, the Earth’s climatic zones, the motion of the sun and moon, and eclipses (shown here). There are marginal notes in the same ink as the main text, as well as notes and an added bifolium in a later cursive hand (fols. 23-24). An annotation dated 1399 indicates that this manuscript was used by Pietro di Santo Giovanni, a physics student in Florence (fol. 9v).

“Algorismus, Tractatus de sphaera,” Scanning the Skies: A Virtual Exhibit of Astronomy Manuscripts at the University of Pennsylvania, accessed May 16, 2021, https://aylinmalcolm.com/astro/items/show/9.