“Bread and Milk for Children.”

So reads the subtitle that appears in four manuscripts of Geoffrey Chaucer's Treatise on the Astrolabe, a text that he addresses to his young son. Chaucer is widely celebrated for his wry humour and memorable characters, but his understanding of astronomy is less well-known; we examine the literary contexts of his work, but rarely the scientific ones. In doing so, we overlook a body of knowledge on which many medieval writers drew. Whether this subtitle is Chaucer's own or the harsh judgment of an unimpressed scribe, it conveys how fundamental astronomy was to late medieval natural knowledge, whether one chose to pursue a career in academia or (like Chaucer) wool trading and poetry. 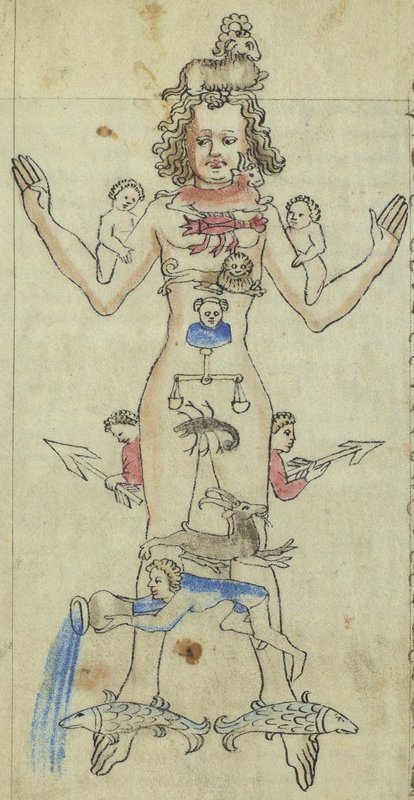 Astronomy was one of the seven disciplines in a medieval liberal arts education, and a prestigious pursuit in academic contexts. Yet astronomical principles also played roles in medieval agriculture, navigation, medicine, music, and religion. Each sign of the zodiac governed a part of the human body, as the “zodiac men” in many manuscripts demonstrate (e.g. LJS 463, fol. 54v, at right). Perhaps most importantly, to set the date of Easter, religious authorities needed to know when the first Sunday would fall after the first full moon on or following the vernal equinox. Medieval astronomy was therefore central to natural philosophy, but becoming an expert in this field required years of effort and training. In order to accommodate the geocentric model of the universe, astronomers had to develop ingenious mathematical calculations.

Astronomical texts also exemplify the intercultural pathways through which knowledge was transmitted in the High and Late Middle Ages. During the twelfth and thirteenth centuries, many of the foundational texts and methods of astronomy migrated across Western Europe through parts of Spain formerly under Muslim rule. In the 1270's, King Alfonso X of Castile founded the Toledo School of Translators, a group of Jewish, Christian, and Muslim intellectuals who translated Classical Arabic versions of Greek texts into Latin and Castilian. Fourteenth- and fifteenth-century European astronomers seem to have continued to consult Middle Eastern astronomy; both Regiomontanus and Copernicus cite al-Battānī, and it is possible that they would have known the theories of al-Ṭūsī or Ibn al-Shāṭir, if not these astronomers’ names. This exhibit attempts to reproduce some of these channels of communication, including a map view that offers a visual guide to the transmission of scientific knowledge across modern national borders.

The codices and fragments in this exhibit date from the twelfth century to the sixteenth, and reveal astronomical knowledge in this period to be a diverse and evolving set of traditions. In "The Scholarly Tradition," you will find three copies of Ptolemy's Almagest, the Classical treatise on planetary motion upon which much of medieval astronomy was established. These include a fifteenth-century Persian copy of al-Ṭūsī's thirteenth-century Almagest recension (LJS 392), and an Arabic copy produced in fourteenth-century Spain for Qursunna Isrāʼīlī, astronomer to King Pedro IV of Aragon (LJS 268). The scholarly tradition continues with Johannes de Sacrobosco’s enormously popular Tractatus de sphaera (LJS 26, LJS 216, LJS 494, MS. Codex 1881), which recapitulates and simplifies Ptolemaic principles for students, as well as technical volumes, such as an early fifteenth-century set of Alfonsine Tables (LJS 174). Several manuscripts combine aesthetics and practical uses, including a striking copy of Regiomontanus’s Calendarium and Ephemerides (LJS 300) created decades after these texts were printed, suggesting that its first owner sought a manuscript that was as beautiful as it was functional.

The "Almanacs and Astrology" collection attests to the presence of astronomy in everyday life, featuring popular manuscripts such as a Persian almanac (LJS 434) and a German astronomical miscellany once owned by children (LJS 445). And of course, there are other "Treatises on the Astrolabe," a tool used to measure the height of an object above the Earth's horizon. The astrolabe was refined and improved in the Islamic world before it was brought north of Spain in the tenth century, likely by Pope Sylvester II.

The most recent manuscript in this exhibit, LJS 64, is a collection of illustrations to Peuerbach’s Theoricae novae planetarum, including many of the rotating discs known as volvelles (e.g. p. 7, at left). Peuerbach’s text addresses Ptolemaic concepts such as epicycles (small circles along which celestial bodies move) and deferents (larger circles along which epicycle centers move around the Earth). It became a standard university text in the late fifteenth century, and remained one until it was supplanted by heliocentric astronomy in the seventeenth century. Indeed, all of these texts describe an obsolete form of science, negated by the Copernican model and its later developments. However, they also reveal a period characterized by intense scholarly engagement with the cosmos, and the active movement of ideas among cultures that shared an interest in mapping the skies.

Aylin Malcolm (exhibit curation, descriptions, website construction) is a Ph.D. candidate in medieval literature and science at the University of Pennsylvania. To learn more about Aylin's research, visit aylinmalcolm.com. Please direct feedback and questions to malcolma[at]sas.upenn.edu.

This is an online version of an exhibit curated for the 2019 Annual Meeting of the Medieval Academy of America. Nicholas Herman and Whitney Trettien offered valuable advice on curation and web design. All manuscripts in this exhibit are held by the Kislak Center for Special Collections, Rare Books and Manuscripts. Volvelle gif by Natalie Naor and Dot Porter.