Home > About the Project 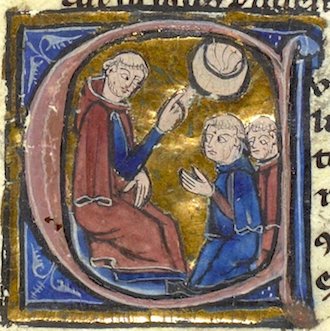 Little is known about Johannes de Sacrobosco (who may have been born in Holywood, Yorkshire) other than his occupation as an instructor at the University of Paris. Yet his De sphaera mundi was arguably the most influential Latin medieval text on Ptolemaic astronomy in late medieval Europe, and remained a standard university text until the late seventeenth century. This short work describes the division of the “sphere of the world” above the Earth into nine parts: the first moved, fixed stars, and the seven known planets, including the sun and moon. It also discusses the climatic zones of the earth and the mechanisms underlying lunar and solar eclipses.

To learn more about this text and its early editions, see the De sphaera project, including a database, led by Department I at the Max Planck Institute for the History of Science: The Sphere. Knowledge System Evolution and the Shared Scientific Identity of Europe.

MS Codex 1881 was acquired by the Kislak Center for Special Collections, Rare Books and Manuscripts in 2017. In addition to De sphaera mundi, it contains a selection of popular Latin astronomical texts, including the anonymous Theorica planetarum, another widely used textbook that was often bound or printed with Sacrobosco’s text; a set of Alfonsine Tables; and a series of treatises on the uses of astronomical tables. Many of this manuscript’s diagrams are heavily annotated, and Sacrobosco's text is interspersed with an unedited gloss, which is found in at least three other manuscripts:

Other features of this codex include six volvelles, a colophon dated 1381 (fol. 36v), and an annotated Hebrew alphabet (fol. 95v).

In addition to MS Codex 1881, there are three other De sphaera mundi manuscripts located at the Kislak Center, including two Latin copies produced during or shortly after Sacrobosco's lifetime (LJS 26 and LJS 216), and one copy of the only known Hebrew version, translated in 1399 by the Provençal physician Solomon ben Abraham Abigdor (LJS 494).

Aylin Malcolm (diagram descriptions, transcriptions, site design) is a Ph.D. candidate studying medieval literature and the environmental humanities at the University of Pennsylvania. This project was supported by a Graduate Student Research Fellowship from the Schoenberg Institute for Manuscript Studies.

Alfred Hiatt and Hanno Wijsman contributed to the climata map's place names and translations. The rotating diagrams were created with assistance from Doug Emery based on a similar resource by Schuyler Duveen. Images of MS Codex 1881 were sourced from OPenn.